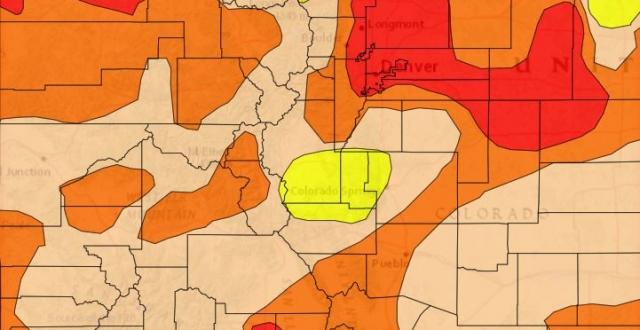 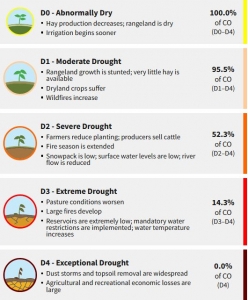 According to the November 30 update from the National Integrated Drought Information System (NIDIS), 0% of the state falls into the exceptional drought category, 14% is in an extreme drought, 52% is in a severe drought, 96% is in a moderate drought, and 100% of Colorado is experiencing abnormally dry conditions. This is an increase from 51 percent in the abnormally dry category just three months ago. The map featured above shows the drought conditions on November 30.

The mild fall has kept trees and other vegetation from going dormant therefore they are still using up water that would otherwise be locked in place by cold temperatures. District customers are not restricted by watering rules from November 1 –  April 1. However, only perennial non-grass species should be watered during this time frame. Turf grasses will naturally go dormant during cold/dry times. Trees and bushes should be watered as follows:

During a 3 week dry spell:

More information on Winter Watering can be found at the following links:

When is it OK to water in the winter? | Denver Water

Denver Water’s reservoir levels are 84% full which is the same as it was this time last year. Denver Water’s supply reservoir contents as of November 29 are represented in the table below.