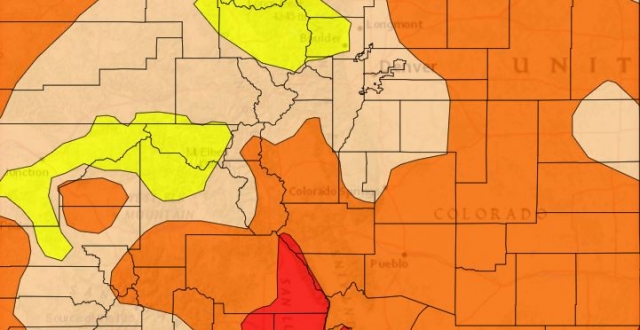 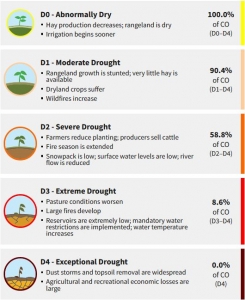 According to the February 22 update from the National Integrated Drought Information System (NIDIS), 9% of Colorado is in an Extreme Drought (D3), 59% is in a Severe Drought (D2), 90% is in a Moderate Drought (D1), and 100% of the state is Abnormally Dry (D0). Zero percent of the state is registering in the Exceptional Drought (D4) category. The map featured above shows the drought conditions on February 22.

Current statewide drought conditions for Colorado have improved since October 2021. The first quarter of water year 2022 was above normal in terms of temperature. As of mid-January a rough divide appeared in Colorado with regard to precipitation, with western slope generally experiencing wetter conditions, while the eastern slope generally continues in drought conditions. La Niña is currently in effect and projections show somewhat equal chances for above or below average precipitation moving into the spring. La Niña years in Colorado tend to result in smaller, drier storms overall.

On February 27, statewide snowpack was at 96 percent of median. 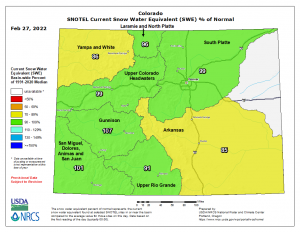 Denver Water’s reservoir levels are 82% full and were 80% full this time last year. Denver Water’s supply reservoir contents as of February 22 are represented in the table below.