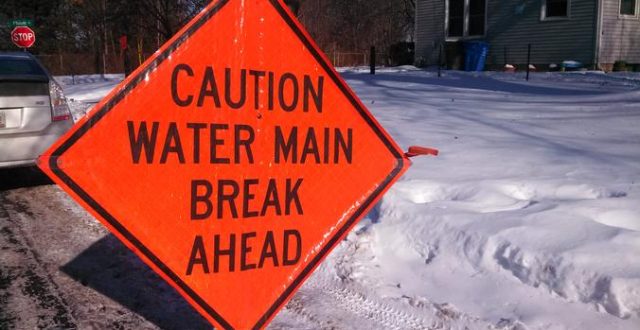 Platte Canyon experienced four significant water breaks in November, specifically the holiday weekend of November 23rd. Three of the failures were due to electrolysis corrosion and one was caused by vault movement.

Beginning Friday, November 23rd, crews investigated a water main failure at 7504 South Depew Street. This repair took three days to be completed due to the overwhelming amount of pipeline within the vicinity. To determine where the failure was located, crews investigated multiple segments of pipe and the failure was finally discovered Monday, November 26th.  Because the Columbine Gardens Memory Care Center would be out of water for an extended period, crews worked with their staff to coordinate the best time to facilitate the repair. Ultimately, the care center agreed to allow crews to begin work in the late hours of Monday. Fifteen feet of pipe had to be replaced due to a water vault settling and rupturing the water line. Crews completed the repair Tuesday, November 27th at 10 a.m.

On Sunday, November 25th, a severe failure was reported at 7106 South Kendall Boulevard. A 12-inch cast iron pipe was isolated, and crews repaired the main overnight to reestablish service by 4 a.m. the next morning. The repair was corrected using a repair clamp over the broken section of pipe. The cause of this break was determined to be electrolysis corrosion. There was major property and road way damage due to the large amount of water and mud from the break. Platte Canyon staff spent three days cleaning roads and properties to return them back to prior conditions.

Monday morning, November 26th, in conjunction with the Depew Street repair, a water break was reported at 5543 West Canyon Trail in Columbine Hills. The cause was again electrolysis corrosion on a 6-inch cast iron pipe. Seven feet of pipe had to be replaced. There was moderate damage to the right-of-way that will be restored in the coming weeks, and water service was re-established by 4 p.m. that afternoon.

The last break of this chain reaction was a minor leak on 5429 West Geddes Avenue on Tuesday, November 27th. This leak was on a 6-inch cast iron pipe and was determined to be caused by electrolysis corrosion. Crews were able to correct this leak with a repair clamp. There were no damages to property or road ways.

Scott Hand, Operations Supervisor, suspects the failures occurred because of pressure fluctuations that resulted from the amount of water loss on the Kendall Boulevard break. These significant failures reinforced the District’s new approach to water main replacement.

In 2018, Platte Canyon staff created a new rating water main assessment program was developed to prioritize the replacement of water mains over the ten-year planning horizon. This process expands upon the previously used analytical, objective rating process to include a more comprehensive assessment of all District-owned water mains that incorporates a wider range of factors. Additionally, this new process provides for a broader evaluation of water mains in that multiple segments of pipe located along the same street are grouped together and evaluated as one project. This new comprehensive evaluation groups several co-located priority segments into projects and recommends replacement on a more aggressive schedule. This may result in the need for additional funding sources as current District reserves may not be adequate to fully fund all identified projects. A detailed financial analysis will be performed in the coming months and presented to the Board for discussion.

If you have any further questions regarding these breaks or the new rating criteria, please call the office at 303-979-2333.